Isotherms by re-gassing Coal and Other Carbonaceous Samples

Sigra performs laboratory derived sorption isotherms on coal samples utilising pure gases (normally methane and sometimes carbon dioxide or other gas if it is present).
A sample can either be provided by the client, or more normally Sigra makes up a sample to represent the seam from core supplied as part of the gas content measuring process.

This sample is crushed, the moisture content determined, and the weighed sample is placed in a pressure vessel which is briefly evacuated and then filled with the test gas to a pressure greater than reservoir pressure. The pressure is allowed to reach equilibrium and then gas is released and its volume measured. This process is continued down to near atmospheric pressure. The process may then be repeated for a different gas type. Finally helium is used in a similar manner to determine the dead volume in the pressure vessel. The vessel is then opened and a sub sample taken for moisture and proximate analysis – see below.

The isotherm is analysed in terms of Langmuir and logarithmic constants on a total mass and on an ash free basis.

Sigra reports isotherms on the basis of the measured behaviour, a Langmuir isotherm model fit (equation 1) and a logarithmic fit (equation 2) with an error estimate based on the difference between modelled and fitted behaviour. Coal sorption behaviours may sometimes be best expressed by using one or the other model. Reports are provided on an as received and mineral matter free basis.

The logarithmic equation may show very clearly a change in sorption characteristic at a certain pressure whereas this cannot be deduced using the Langmuir approach. 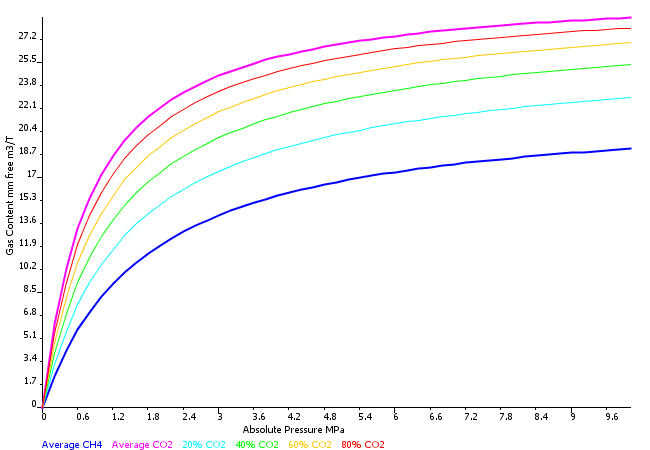 Where required, Sigra can calculate the mixed sorption isotherm of individual gas components. This calculation is based on ideal adsorbed solution theory.

Native sorption isotherms are derived from core that is desorbing immediately after retrieval utilising the in-situ gas mixture. They therefore avoid problems associated with the mathematical recombination isotherms derived from multiple gas types.

The process is to take core directly from the core barrel and to place it in a water filled pressure vessel. The vessel is then sealed and the pressure is allowed to come to equilibrium. A small amount of fluid (water and gas) is then released and its volume measured before re-sealing and allowing the equilibrium pressure to be reached again. This process is repeated multiple times until a pressure close to atmospheric is reached. Gas samples are obtained for compositional analysis. The vessel is then opened, the coal mass, volume and residual water is measured and the coal is crushed to provide a Q3 volume. Samples are normally taken for moisture, carbonate and proximate analysis.

Determining a native sorption isotherm is a slow process. Mixed gas samples may take months to desorb adequately. It should also be noted that because of the initial gas loss the native isotherm will not reach the full sorption pressure of the reservoir.