Sigra uses a variety of models for groundwater purposes. These include industry standard packages such as MODFLOW, and its own special programs. Three of these are worthy of particular attention.

The first is designed to deal with two phase flow as occurs in unsaturated soils. It uses information on the capillary pressure and changes in atmospheric pressure to model the movement of water in the vadose zone.

The second model uses real piezometric data, combined with a knowledge of permeability and storage behaviour gained from field testing, to determine the net inflow or outflow from various zones of the model. It has been used to determine the infiltration and groundwater loss from large slope failure models so that suitable drainage designs can be arrived at, to reduce pore pressures and arrest the slope movement. Figure 1 shows such an application.

The third model is for the design of horizontal drains on a slope. It enables the drain spacing to be determined based on a wetted thickness upstream of the drains and the desired wetted thickness downstream. It assumes an impermeable bedrock layer at the base of the slope. 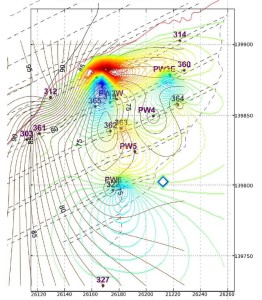 Model of net fluid flow and loss during a high rainfall period on a slope. The blue and green areas indicate net infiltration while the yellow and red zones indicate drainage. The latter occurs in this case from horizontal drains in the toe of the slope.